This puts flagship manufacturers in an interesting position. They have to either sell devices cheaper, to make them available to users who obviously want them, but cannot afford them, or find a way to make money from the people who already own the devices. And this is where things start to get interesting. Enter, modularity.

It’s simple, really. You have a skeleton that holds the key parts, and a bunch of modules – battery, camera, processor, anything – that the user can replace without having to fiddle with a soldering iron. Making phone parts interchangeable reduces electronic waste, brings down the cost of repair, and keeps phone companies from trying (and failing) to sell phones to a saturated market at ludicrous profit margins. Instead, they can now sell cool shiznit to the users they already have. And because they’re no longer restricted by the traditional smartphone form factor, we can begin to challenge the idea of the smartphone as we know it. In theory.

A bunch of players like Phonebloks, Google+Motorola, Fairphone and Circular Devices have played with the idea of modular, user-upgradeable phones for years, but I feel like the idea never really gained any traction. It was relegated to arcane Telegram group-chats, YouTube, and Kickstarter campaigns, and it definitely didn’t break into the mainstream. That is…until now.

I thought the flagship space had become a two-horse race between Apple and Samsung until LG unveiled the G5 at this year’s Mobile World Congress and showed it’s got a few tricks under its sleeve. What a stallion it’s turned out to be. Smaller than the G4, it doesn’t have all the weird design flourishes that made me swear off LG phones before now. Most of the body is smooth, seamless, and it has a slight curve at the top. It’s definitely LG’s most ergonomic effort yet. Push the button at the bottom left, and the bottom end slides out so you can attach the modules we talked about earlier. You do have to turn the phone off first though, because the battery is attached to that bottom end and you really do not want to pop out the battery while the phone is running. Sadly, our friends at LG didn’t send us any Friends (that’s what they are calling their modules) so I didn’t actually get to use any of them. I haven’t missed much though (if online reviews are to be trusted), and LG did a good job of making the modular function invisible unless you actually need it. That didn’t stop me from grinning like a child whenever I found a new excuse to show someone that I could dis/re-assemble my phone like a gun magazine. LG has to improve the user experience in future iterations because I found it a bit fiddly when I had to take out the battery for the first time. There was a long debate online about what material the G5’s chassis is made of. That’s because LG’s advertising calls it a “smooth colorful metal surface”, and a teardownvideo implied otherwise. Don’t bother with the technical details; it’s an aluminium device, with a generous layering of paint/polymer.

I only bothered bringing that up because I like it a lot. While it doesn’t feel as “expensive” as say, the Galaxy S7 Edge, it’s just as sturdy and unlike the S7, the matte gold finish on my review unit actually repels fingerprints. Best of both worlds, IMO. Plus, I really can’t take the metal vs. plastic argument too seriously because whichever of the two you prefer, you’re going to buy it and stick it in a plastic protective case anyways…so wyd?

Psst. Don’t tell my fellow Apple acolytes, but I think LG has converted me on one key feature. You see, I used to think it was stupid to have a fingerprint sensor/home button on the back of the phone, and I was right. It’s usually all false triggers, and weird movements to unlock your phone when it’s resting front-side up. But LG has won me over with their implementation. I registered both my index fingers, and so I’ve usually already unlocked the G5 by the time I’ve gotten it out of my pocket. If it’s resting on a table, face-up, I’ll simply use LG’s Knock Code which lets you tap (or knock) a pattern on the bottom half of the screen to unlock it. It’s not perfect, but it worked often enough for me to consider it reliable.

The display is a lovely 5.3-inch Quad-HD IPS panel, with a pixel density of 554 pixels-per-inch and a resolution of 2560 x 1440. Admittedly, because it’s an LCD display, its blacks aren’t as black as they can be, its viewing angles are also not as great as on SAMOLED displays like the Galaxy S7 Edge, but it’s damn sharp and I think that’s more important for the average user. I also think LG’s implementation of the always-on display is much better than Samsung’s. Instead of dumping a static clock on the screen when the phone goes to sleep, you can see which apps are receiving inbound signals as they come in. That’s because their icons are given prominence on the display. Where do I start? Right. The beginning. LG put three (yes, three) cameras in the G5, and they are worth more than their weight in gold. One of the rear cameras is a 16-megapixel, 78-degree shooter which does really well in low light, and the other (which is my favorite thing about this phone) sports an 8-megapixel, 135-degree lens. I don’t think I’d be doing it justice if I merely described the latter, so I’m going to pause for a bit here and let the images speak for themselves. The wide-angle lens gives images a depth I’m not used to seeing in smartphone photography.

PS: there’s been no external processing on any of these photos. The selfie camera is an 8-megapixel shooter, which does really well outdoors, but not so much in low light. I was too busy geeking out over the wide-angle lens above to pay much attention to the selfie camera. I finally started using my Snapchat account, and I didn’t get any of the usual Android nastiness, so I’m giving it a green light.

I found a video of Samsung’s S7 Edge Injustice Edition on Twitter, and that drove me to the Play Store to get the Injustice game itself. Needless to say, the phone didn’t hiccup, or overheat even when I played the game continuously for over an hour. I cannot say the same for a few other flagships I’ve reviewed.

4Gigs of RAM and Qualcomm’s new weapon, the Snapdragon 820 both mean that the G5 handled everything I threw at it without breaking a sweat. After Injustice, I played FIFA 2016 UT, Asphalt 8, Need For Speed: No Limits, Mekorama, and Color Switch with ease.

The benchmark scores look rather impressive, too. LG’s UX 5.0 user interface is ugly, and is certain to alienate veteran Android users/enthusiasts. That’s because it takes a page from Apple’s playbook and does away with the app drawer. I’m not a fan of app drawers, myself (especially since I always arrange the 9-odd apps I actually use on my homescreen anyways), but I don’t know what it is about LG’s implementation that puts me off. Take a look.

It’s probably the icons. Not unlike a certain UI skin I once reviewed, LG sent their icons down a rollercoaster ride to Candyland, hugging themselves to death as they devolved into a (colourful) oblivion. Meh. Less than a day after setting up the phone, I had loaded up Nova Launcher from the Play Store and gotten myself a great-looking T’Challa/Black Panther wallpaper with which to garnish it. Palliative. 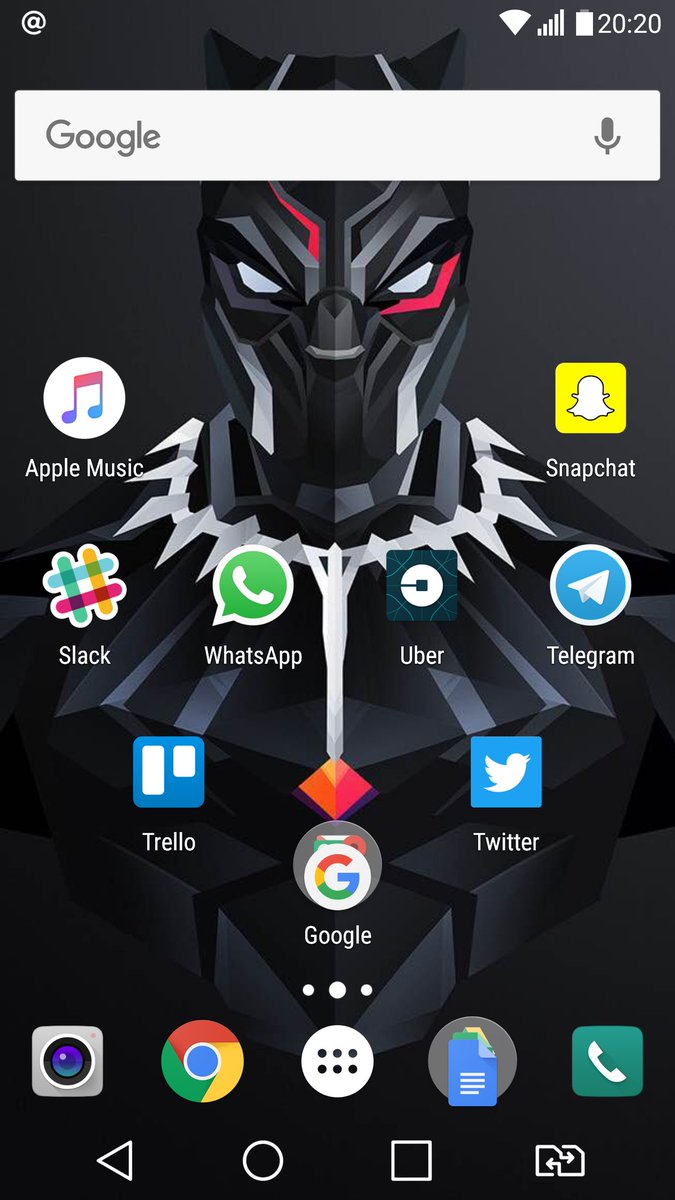 Not exactly, but props to you if you read that in Shirley Bassey’s voice. You see, making the battery user-replaceable means that there’s not a lot of room for it in the phone’s shell. Spec peddlers will froth at the mouth when they hear that LG put a 2800mAh juice pack in the G5, when Samsung’s Galaxy S7 Edge packs a 3600mAh battery. But I know better.

In spite of the smaller battery, the G5 gave me a full day’s worth of juice – as is expected of ALL flagships in 2016. I’m blaming it on the fact that it’s powered by Android 6.0 Marshmallow (which has battery saving features like Doze) and that low voltage Snapdragon 820 processor. If you somehow manage to drain the battery – by say, playing games for hours at a time, while streaming via Apple Music – the good news is that you can replace the battery in seconds, or charge it with the QuickCharge 3.0 charger (which is one up from the QuickCharge 2.0 in the Galaxy S7). And god, is it fast. I once went from a dead battery to 80% in less than 40 minutes. We all know that batteries charge slower as they get closer to 100%, so the full charge figures are less impressive. Still, when you think about how quickly the G5 gets to 50%, the near-military low-power mode, and you consider the fact that you can pop out the battery and put a new one in – in seconds – you’re unlikely to ever get stranded. I didn’t.

I titled this review, LG G5, and the G is for Geek. That’s because a lot of the things that this phone does better than anyone else – modularity, the wide-angle camera, processing power etc. – are the kinds of things normal people don’t care much about. In the past two weeks, whenever I found something cool about the phone, I’d run to my Telegram or Twitter DM geek group-chats to gush about it. When it was first released, Ipredicted that it may not be the best execution of the modular concept, but a step in the right direction and it turns out I was right.

LG’s G5 is not the best phone money can buy today (I think it’s joint-second best I’ve ever used), but what it represents is exciting to me. It’s a break out from the boring iteration that smartphones have become, and points us instead, to what smartphones will become. If you have N200,000 lying around (in a handbag, in your wardrobe, no less), you should go and buy the G5. I’m keeping this one as my daily driver.